The hologram is based upon Nobel Prize winner Dennis Gabor's theory concerning interference patterns. Gabor theorized in 1947 that each crest of the wave pattern contains the whole information of its original source and that this information could be stored on film and reproduced. This is why it is called a hologram. 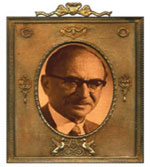 1947 Hungarian scientist Denis Gabor invents holography (for which he is awarded the Nobel Prize for Physics in 1971); he made two-dimensional (flat image) holograms with a mercury arc lamp using exposures of many hours.

1976 The Museum of Holography was founded in New York as an international center for the undertstanding and advancement of holography.

1982 McGrew also invents 2D3D holograms to create layering of flat images, making embossed holograms easier to see in ambient light. MasterCard adds a hologram to its payment cards to combat fraud. The following year Visa follows suit. Hershey Corp uses a licensed image of ET速 on 2D3D hologram stickers as a promotion for its chocolate confectionary, Reese's Pieces, the first major brand to use a hologram for promotion.

1984 The March issue of National Geographic features a hologram on the front cover. 11 million were produced. Johnnie Walker Scotch whisky is the first major brand to use a hologram to combat product counterfeiting.

1988 Glaxo becomes the first pharmaceutical company to use holograms for brand protection, on Zantac which was then the world's best-selling drug brand. DuPont launches its holographic photopolymer for production of white light reflection, or volume, holograms. <

1991 Digital holography makes it debut in the form of dot matrix holograms.

1994 SmithKline Beecham launches Aquafresh速 Whitening toothpaste in the USS om a carton covered in a holographic laminate, the first time holographic packaging has been used for branding.

1995 Iraq is the first country to use a hologram on its standard passport.

2002 The Euro banknotes go into circulation with a hologram on all seven denominations.